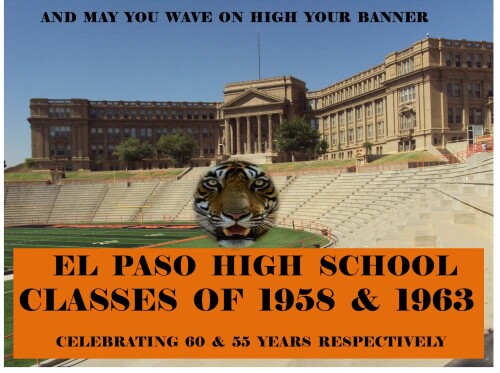 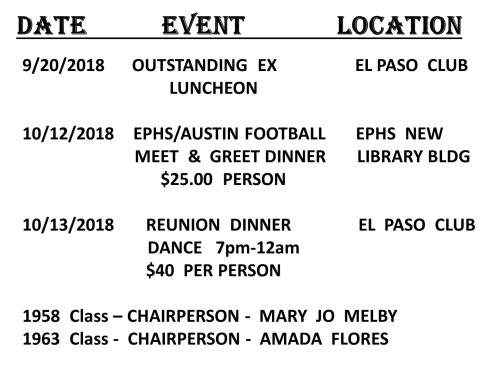 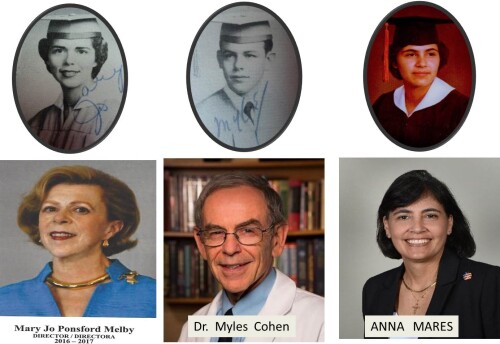 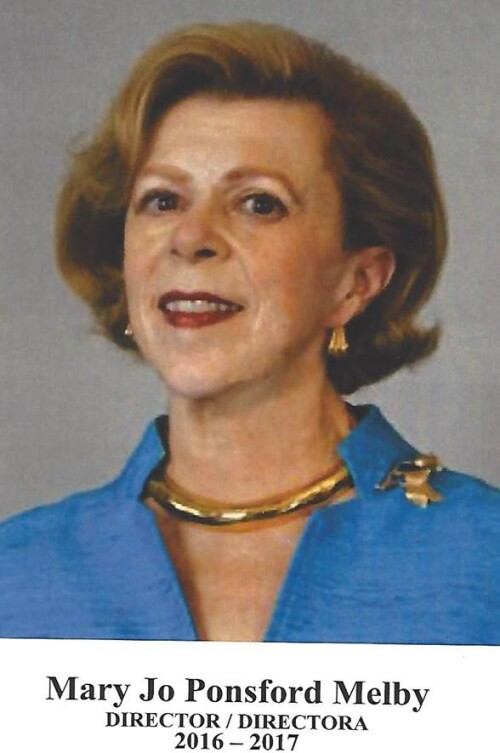 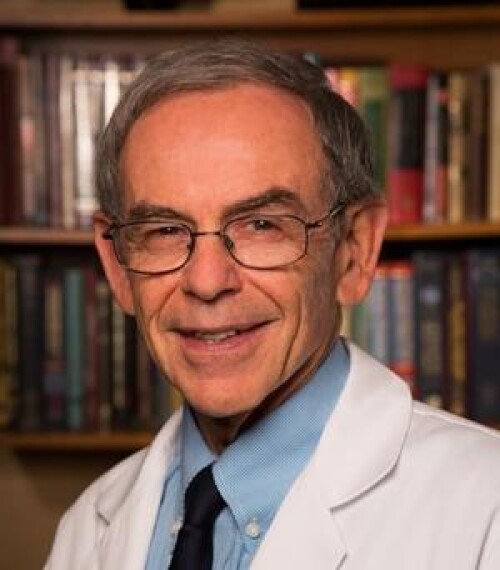 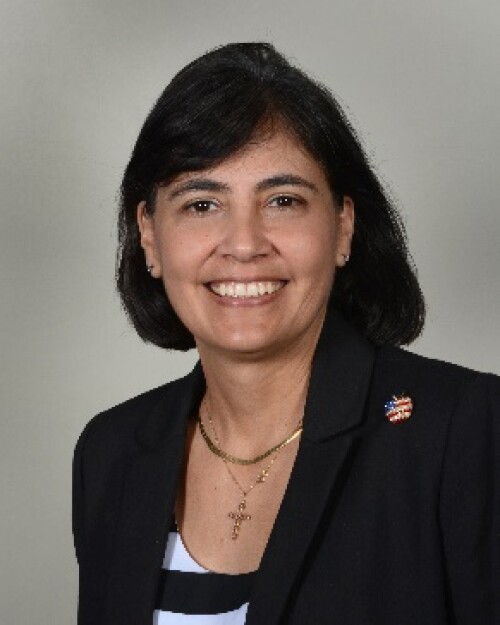 The 1958 & 1963 graduating classes from EL Paso High School celebrate their 60th & 55th Class reunions repectively. An event calendar follows on page 2 and the Outstanding Ex's will be highlighted on the following three pages. Additional pictures and Highlights will follow after those pages to highlight a great celebration for the first High School in El Paso. Mary Jo Ponsford and Amada Flores are the respective Chairperson's for the two Classes.

On September 20,2018 , the Outstanding Ex Luncheon lucheon at the El Paso Club will salute Mary Jo Melby, Myles Cohen, and Anna Mares as Outstanding Exes for this reunion. Mary Jo Melby is chairperson also representing the 1958 Class. Amada Flores is Chairperson for the 1963 Class. On October 12, there will be a Meet and Greet dinner costing $25.00 per person prior to the EPHS/AUSTIN footabll game. It will be held at the new EPHS Library Building. On October 13, 2018, there will be a reunion dinner dance at the El Paso Club from 7:00 PM to 12:00 midnight. There will be a $40.00 charge per person for the Dinner Dance.

The next three pages will individually highlight the great careers of our three Outstanding Exes for 2018. These three are honored for being Great Individuals, Great Professionals and Great Tigers. Mary Jo and Dr Cohen are from the class of 1958 celebrating their 60th reunion also. Anna Mares is from the great class of 1980.more info from each will be found in the next three pages.

Her great, great grandparents Rebecca and Henry Hester Robertson arrived in our state by
covered wagon in the 1800's and settled in Whitesboro, a small community north of
Dallas. Her great grandfather, Calvin Simpson, served as mayor of Whitesboro for
several terms and her other great grandfather, Silas B. Cowell was elected Texas State
Senator from Grayson County for two terms. He was appointed by Governor Pat Neff as
the first Chairman ofthe Board of Controls of Texas. Governor Neff also appointed
Senator Cowell to chair a five member committee charged with determining the location
for Texas Tech College (later University). Senator Cowell's wife, Mary Florence Cowell
was the "Mother of P.E.O. Sisterhood" in Texas having organized Chapter A in
Whitesboro in 1902. She later became the first president ofP.E.O. 's State Chapter.
P.E.O. is an organization that promotes higher education for women both in the United
States and internationally.

Arriving in El Paso in 1897, the Ponsford family became pioneer contractors and built
many historic homes and buildings in the region. Kate and H.T. Ponsford had nine
children and all nine lived and worked in El Paso all of their lives. Mary Jo's
grandfather, H.T. Ponsford was joined by his five sons in the family firm. All four
daughters became teachers. H.T. Ponsford and Sons were the General Contractors for the
Plaza Theatre as well as the Sun Bowl football stadium. They worked closely with the
pioneer architect Henry Trost whose designs they greatly admired.

Mary Jo represented the Woman's Club ofEl Paso in the 1959 Sun Carnival
Court and the American Association of University Women in the Fabens Cotton
Festival.

Two characteristics launched Myles J. Cohen’s personal passions and his professional and humanitarian callings because he attended El Paso High School. First, because his teachers really cared about their students, he developed a real love for learning. He said, “They laid the foundation for my quest to learn. I still believe if a day goes by that I haven’t learned something, it’s a day I have wasted.”

Second, was the diversity of ethnic and religious backgrounds and cultures of the EPHS Student Body never affected the respect students had for one another. He said, “We worked together, liked each other, played together, horsed around together.” He realized, “everyone has value. Everyone should be respected for who they are.”

Myles met the most important person and love of his life, Cita, at EPHS. They had a blind date for the Homecoming Dance in October of his sophomore year. Two months later, that December, he proposed to Cita. He was 15 and she was 14 years old. Eight years later, Cita and Myles were married. They have two married sons, Matthew and Johnathan and two grandchildren, 13 and 2 years old.

Myles was born in Boston, Massachusetts, to Manley and his wife, Lillian. When Myles was 12, his family moved to El Paso, where he attended Mesita School and El Paso High School.

In 1959, Myles’s father died as he was preparing for finals his freshman year, at Princeton University. He was offered a full scholarship there, where he worked 3 jobs while he went to class every day. He went on to Columbia Medical School, again on a full scholarship. His internship and both general surgical and orthopedic residencies were at UCLA School of Medicine. During the Vietnam War, he served in the US Air Force, at Sheppard Hospital in Wichita Falls, TX. As the casualties came home for treatment and rehabilitation, Myles developed his interest in the specialty of Hand Surgery.

For over 40 years, Dr. Cohen served as Director of Hand and Upper Extremity Reconstructive Surgery for Cedars-Sinai Orthopaedic Center for Excellence, in Los Angeles, California and subsequently as the Chief of this specialty with the Department of Orthopedic Surgery. He held dual clinical professorships in surgery at both the University of Southern California’s Keck School of Medicine and at Cedars-Sinai Medical Center.

In 1986, after the Soviet invasion of Afghanistan, as a member of the International Medical Corps, Myles went 15 miles from the Khyber Pass, to train Afghan medics. He worked at two hospitals under very primitive and understaffed conditions. He taught at the Afghan Surgical Hospital reconstructing hand wounds and screening casualties for further treatments in facilities in other countries, including England, France and the USA.

While he was in Pakistan, one of his colleagues, who was Muslim asked him if he was Christian. Myles told him he was Jewish. He was told not to tell anyone else he was Jewish or he would be killed. Because of the man’s respect for him as a fellow human being, helping others in need, Myles changed the man’s opinion. Without thinking of their religious affiliations, they continued to work together.

For Myles, in his experience working in Afghanistan, he realized a most important affirmation which stemmed from his experiences at El Paso High School. He said, “All men are created equal. We need to talk to each other. We all want the same things.”

In 2017, a newly formed Levin/Gordon Chair of Orthopaedic Surgery, at Cedars-Sinai Hospital was established in his honor. He and his extraordinary life partner, Cita, will celebrate living between their new home, near their children and grandchildren, in Denver, Colorado, and in their lifelong retreat in Cloudcroft, New Mexico.

I have very fond memories of my friend, Myles, while attending EPHS. He was a brilliant student, honest, friendly, and he and I shared many tennis matches with good friends there. This honor is well deserved. I wrote a historical fiction book that recounts many instances recalling H.S. life at good ole EPHS.

Anna Lucia Mares, EPHS Class of 1980, 2018 EPHS Outstanding Ex
Anna Lucia Mares, Class of 1980, was born in Anchorage, Alaska where her father served in the United States Air Force. She lived and was raised in the Mission Hills area where she attended Mesita Elementary School before going to El Paso High School (EPHS). While at EPHS, Anna was a 4-year varsity basketball letterman, excelled scholastically, served as Student Council President, and was selected as All EPHS Girl. As a senior in high school, Anna worked with the El Paso County Historical Commission to research, document and submit the application to the National Historic Commission and the Texas Historical Commission to have EPHS be recognized as a National Historic Site. The submission was approved and EPHS is now a Recorded Texas Historic Landmark (RTHL) and is listed in the National Register of Historic Places (NRHP). Due to Anna’s efforts, the “Lady on the Hill” will always be preserved and protected.
After receiving her Electrical Engineering degree from the University of Texas at El Paso, Anna went to work for the U.S. Army Research Laboratory. She created specific innovative performance-based methodologies to increase friendly aircraft protection thereby reducing fratricides to United States and Coalition forces. She is highly regarded and respected in her field. Her technical awards include the Army Research Laboratories 13th Annual Honorary Award for her work on the Analysis for Air Defense during Operation Iraqi Freedom, the Achievement Medal for Civilian Service, and the Human System Integration Practitioner of the Year Award. Anna has received letters of commendation from the Secretary of Defense, Director of Operational Test and Evaluation as well as many of the Commanding Generals of the U.S. Army Air Defense Artillery Center.
Anna is always ready to participate and help in anything having to do with EPHS. She was instrumental in making the Centennial Celebration a success. She was part of the core team that planned, raised money, located alumni, and rallied the community to participate in this once-in-a-lifetime event. As a member of the EPHS Alumni Board, Anna continues to pursue activities that assist the students, faculty, staff, and school. She is currently submitting grant applications for funding to construct the “El Paso High School Museum” as well as grants to fund the digitizing and preservation of the over 100 years of photos, yearbooks, newspapers and artifacts. She also worked with El Paso Independent School District to ensure that an expert on restoration of historic buildings was selected to evaluate the condition of the EPHS façade.
Anna always gives unconditionally to her family, friends and community. Whenever possible, she reaches out to students to promote education. Anna volunteers her time to promote education by providing inspirational Science, Technology, Engineering and Math (STEM) seminars to the 5th graders at Carlos Rivera School and to the Girl Scouts. She mentors a Loretto Academy Challenge Program student and encourages her to become the first college graduate in her family. After submitting the application and receiving a DoD STEM grant for robotics, Anna worked with the Loretto Angelbots robotics team to build a robot for competition. She helped these girls realize their own creativity, imagination and intelligence. Anna serves as an inspiration and role model for young women throughout the community to strive for and achieve success in the fields of science and math.
Anna Lucia Mares is a true El Paso High School Outstanding Ex. 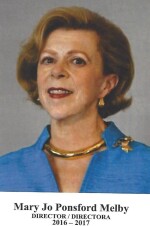 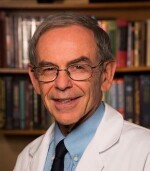 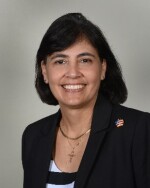 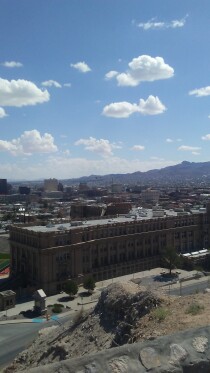 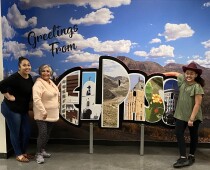 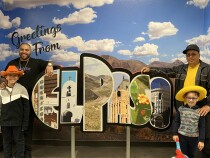 People in line for tattoos at West Texas Tattoo, with all of the money, raised going to a fund for... 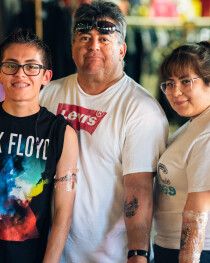 A family shows their El Paso tattoos during a fundraiser at West Texas Tattoo for the victims of a mass... 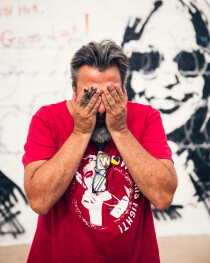 Manuel Oliver, who lost his son in a school shooting in Parkland, Florida, painted a mural at Las Americas Immigrant... 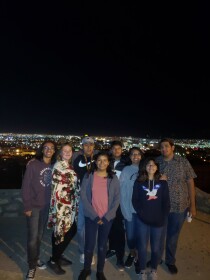 A couple of friends finding time to hangout outside of school! 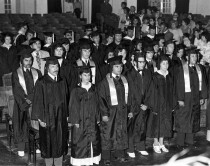 EPCC graduates 28 students in its first class. Since that time, EPCC students have earned more than 80,000 degrees. 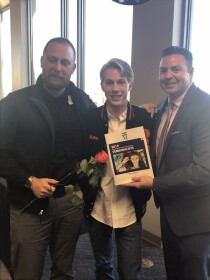 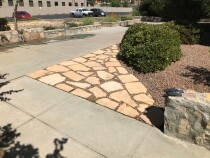 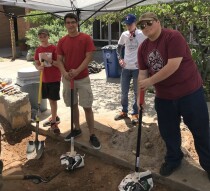 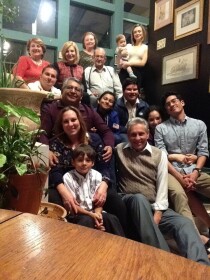 One of the oldest football stadiums inf the city of El Paso. The Irish usually use this stadium as their...