These policemen dressed up for the Taft-Diaz meeting in El Paso on October 16, 1909. The meeting of presidents William Howard Taft and Porfirio Díaz at the Mexican-American border was the first in history between the presidents of the United States and Mexico. It was very carefully planned. They first met in the Chamizal area, which was in dispute between the two nations, and later the same day they met in Ciudad Juárez. The highlight was the banquet at the customhouse, which had been transformed into a reproduction of one of the famous salons of Versailles, France.
During his visit to El Paso President Taft reassured that the construction of the Elephant Butte Dam would start soon. Nineteen months later Porfirio Díaz was overthrown with the capture of Ciudad Juárez by revolutionary forces. 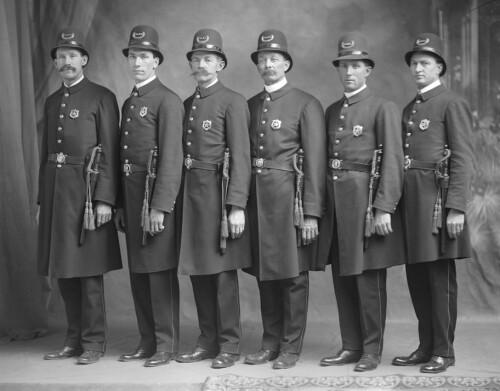