The image shows Principal Olalee McCall, George Chandler, and Estine Davis posing with their students in front of Douglass School. The School had been organized by black families in 1883. It added a high school program in the 1890s. In 1920, the School moved to its current location on Eucalyptus Street. The school became both a place to learn and a social center for black families until El Paso public schools were desegregated in 1956. The School was named after Frederick Douglass (1817-1895), who escaped slavery and devoted his life to the abolition movement and black rights in the United States. In the 1940s, the number of students had increased to 383.

Olalee McCall was an English teacher at Douglass School, before she became the first female high-school principal in the El Paso Independent School District in 1937. The house of the McCall family was purchased by the city in 1985 and became the McCall Neighborhood Center. It now is the community center of the African American community in El Paso.

George Chandler served in World War II and returned to El Paso after. He then taught English and choir at Douglass School.

The El Paso ISD desegregated on Sept. 6, 1955. On that day Douglass School had 207 fewer students (343) than the year before. On that day I met an African-American in my seventh grade class at Houston School for the first time. You might want to correct the date in the figure legend above. See El Paso Times for Sept. 7 1955 for more information.

Teachers and Students in front of Douglass School in the 1940s 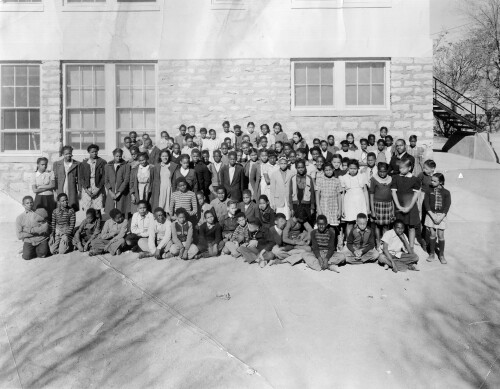