Lola Brown looks over the activities of her class at the MaCall Nursery in the mid-1940s. The McCall Nursery provided an opportunity for the children to learn social skills, develop their artistic ability, and embrace education. The nursery's goal was to provide first-class care and guidance for children of working parents.

The McCall Nursery relates to the legacy of the McCall family.
Marshall McCall was the first black mail carrier in El Paso. His wife was an English teacher at Douglass School, the only school for blacks in El Paso until 1956. In 1937, she became the first female high-school principal in the El Paso Independent School District. The McCalls built their home at 3231 East Wyoming Avenue out of stone and rock. The sturdy structure and property was purchased in 1985 by the city, and it became the McCall Neighborhood Center. The building has been expanded and is home to a historical marker for Henry O. Flipper and Dr. Lawrence Nixon. It also has a historical Buffalo Soldiers exhibit, a Douglass School room, a library full of African-American history books and a variety of displays chronicling the history of the African-American community in El Paso. The historic building is the community center of the African American community. 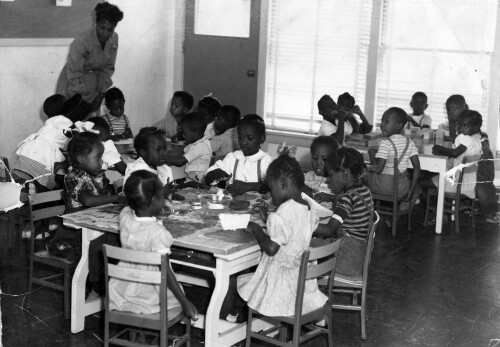