The fourth bicyclist is taking the photograph! Mrs. W.R. Brown may be on the left. The location is unknown. Teaching and performing kept Kate busy, and she proved herself a modern woman. She belonged to the Jolly Girl Bachelors, who gave dances and played cards to amuse themselves. At times she taught at two or three schools at the same time and so she accomplished another ﬁrst: owning and riding in public the newfangled contraption called a bicycle from school to school, something unheard of even in the frontier west. Heretofore, only men had been seen cycling down El Paso’s few streets. Riding her bike on the dirt roads and through the sand, Moore rode as far as 600 Montana, the site of Mesa School (later Bailey), according to Mary Cunningham in her history of the El Paso Woman’s Club. Despite the fact that Kate wore the long dresses of the time, high shoes and leggings, the town’s gossips were “dreadfully shocked,” according to a 1936 El Paso Herald-Post 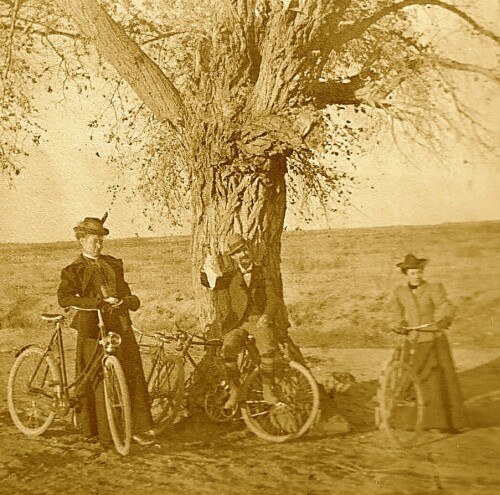