If you live in El Paso, then you’re all too familiar with the seemingly abandoned, large red brick building and rusty metal silos on the west side of town. Coming into town on I-10, it’s difficult not to take notice of the building with Globe Mills boldly emblazoned across the upper level of the western facade. In my efforts to learn more about the building, I found out that the man and the company behind it were equally fascinating.

At a cost of $135K, Globe constructed their fifth mill in El Paso, TX in 1910, and it was the first located outside of California. With the construction of the mill came the creation of El Paso Grain & Milling. That same year Keller built an ice manufacturing plant in El Paso at a cost of $115K and created the Globe Ice and Cold Storage Company. These businesses created hundreds of jobs for El Paso.

By 1922, Globe Mills had a capitol stock value of $15M (about $210M today when calculated for inflation), and Keller was well known throughout the U.S. Globe Mills was eventually bought out by Pillsbury in the 1940s and the El Paso mill closed sometime in the 1960s-70s.

Keller is known for building the first fireproof flour mills in the west and were so well constructed, that a few of the mills have been re-purposed and are still in use today. The El Paso mill isn’t so lucky though.
Some time after the mill closed, part of the facility was utilized by the Claude Barry & Co. feed grain brokerage. Since the property is sandwiched between I-10 and I-85 with train tracks on either side of the property, the location isn’t ideal for much. TXDOT thinks so as well and has since purchased the land, and are razing the mill to build a $500M 375 loop extension.

106 years of El Paso’s history knocked down in the name of progress. So, if you’re whizzing along East bound I-10, be sure to look south towards Mexico and take a last, long look at a fading piece of history.

CREDIT: Text and most of the photos courtesy of “One of the Brave,” http://oneofthebrave.tumblr.com/post/136713889309/if-you-live-in-el-paso-then-youre-all-too

This major industrial building was torn down in 2017 to provide improved transportation in El Paso Texas.. 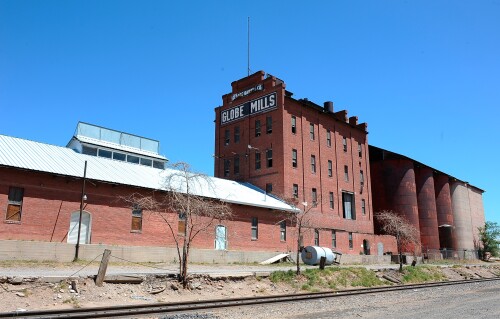