Border Patrol - first Border Patrol Academy Class made up of recruits from the entire Mexican Border. Photograph taken in 1937 at Camp Chigas located in the Chamizal area.
Only identified - Front Row - Griffith McBee and H.C. Horsley - Fourth and Fifth from left. Photograph of one woman in the middle - surrounded by men in the photograph. 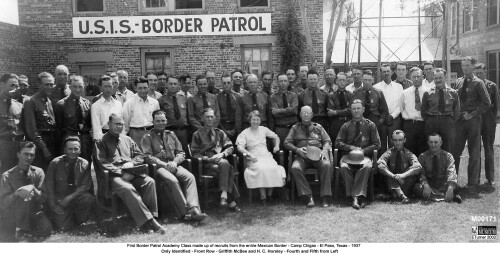 Cordova International Bridge in Chamizal area in El Paso Texas circa 1993 is used by truckers and citizens.of both Mexico...